Gallery for Wyzen is available: Here

Wyzen is one of the former Eight Guardian Generals and the Powerhouse of the The Seven Deities. 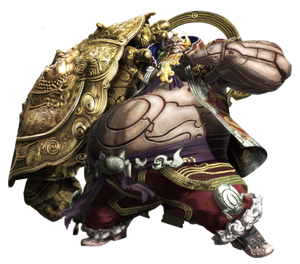 Wyzen is the tallest and largest member of the Seven Deities. Wyzen wore crimson and yellow baggy pants with a purple sash and a vest matching the same colors. He had a dark skin tone and wears the symbols and markings which most Deities do on his arms, torso, and face. He had a beard made of golden-colored hair while the hair on his head was tied up in a bundle. His most notable trait was his massive metallic golden right arm which portrayed an ornately formed structure and a face carved into the middle. Wyzen also possessed a high level of girth to match his size.

Wyzen is loyal as well as cocky and arrogant which tends to get the best of him in battle. This is shown when he taunted Asura incessantly and showed off his powers at the cost of underestimating his opponent. He takes great pride in his status as a god and flaunts it towards others at any given opportunity. He is known for being incredibly dramatic and loves to strike extravagant poses to others to emphasize his greatness. He also appears to lack a degree of common sense and intelligence as he casually wasted a vast amount of mantra the Seven Deities had collected for the Great Rebirth in a final attempt to defeat Asura, causing Kalrow to call him a idiot. Wyzen is also the most prejudiced of the Seven Deities, as he greatly sees humans to be greatly inferior beings to himself and his kind. Hints were given that Wyzen is the God of Violence.

Before Asura is betrayed, Wyzen first appears alongside Sergei and Kalrow and tries to persuade Asura into Deus's cause but he refuses. Later he appears aiding him alongside Yasha and Augus during the battle against the Gohma fleet above the planet, Gaea. Following after the victory against the Gohma, he then found out about the Emperor's death due to being "murdered" by Asura. He quickly deemed him a 'traitorous filth' upon cornering him.

When Asura returned, Wyzen confronted him, mocking him about Asura's failure. Enraged, Asura engaged Wyzen in battle, however, Wyzen was more powerful than before and could match Asura's powers. The fight didn't last long as Asura's rage granted him the power to defeat Wyzen. But the latter didn't accept his defeat and transformed into a giant form of himself. Wyzen told Asura that it was Mithra's power that granted him this amount of power. Now calling himself Vajra Wyzen, he fought Asura in the sky and on the ground. Asura had to defend himself as Wyzen's powers went on another level.

The energy projectiles shot by Wyzen caused Asura to go from defense into offense, so Asura attacked Wyzen with everything he had. Wyzen, losing his advantage attacked Asura again, both their fists hitting against each other in the sky. Asura however was able to hit Wyzen's huge body with such force, that Wyzen was shot into the atmosphere. Asura had defeated Wyzen, at least it seemed so. Wyzen, floating over Gaia, unleashed his full power and transformed into Gongen Wyzen, his most powerful form, which was as huge as Gaia itself. Using only his finger, Wyzen tried to destroy Asura. Full of Rage, Asura collected all his power and stopped Wyzen's finger. Then he summoned all six of his arms and punched with immense speed against Wyzen's fingertip. The last punch, filled with Asura's rage and strength, caused Gongen Wyzen's fingertip to implode. This caused a chain reaction which slowly destroyed Wyzen's body. Shocked, Wyzen could only watch as his body was completely destroyed.

Retrieved from "https://asuraswrath.fandom.com/wiki/Wyzen?oldid=15122"
Community content is available under CC-BY-SA unless otherwise noted.